In this blog, I will explain the different saws that are available to us woodworkers.

The typical Panel saw consists of a tempered steel blade connected to a handle. Along the saw blade are teeth which have been cut depending on it’s intended purpose. Panel saws have a stiff blade so do not require a back to the blade.

Ripsaws are used to cut wood along the grain. These saws have fewer teeth per inch than crosscut saws. The reason for this is that the gullet of the tooth is larger and carries away the sawdust faster.

Crosscut Saws have more teeth per inch compared with Ripsaws. The crosscut saw is used to cut wood across the grain.

Handsaws that have the blade reinforced with a steel or brass stiffener to the top. We call all saws that have a back to the blade a ‘Backsaw’. Tenon and Dovetail saws are generally backsaws and require a rigid back because the saw would otherwise buckle on the push stroke.

It might be an obvious statement but the Tenon saw is designed for cutting tenons. The tenon saw is ground and sharpened with crosscut teeth. A Tenon saw will have around 13 TPI or 14 PPI. The tenon saw has a deep blade so you can cut deep tenon shoulders before reaching the back of the saw.

A saw that is designed to be used with a mitre box is called a Mitre saw. The Mitre box can be made from wood, plastic or steel. These Mitre saws can be up to 30 inches or 90cm in metric. Although the use of handsaws has a therapeutic feeling it is practical to use an electric mitre box, the chop saw.

Sash windows are still popular in the UK and colonial Americas. The fabrication of sash windows is a complicated past time and a series of specialist hand tools were made including the Sash saw. Traditionally the Sash saw was used in sash window construction but the name has an inaccurate meaning. Flexible backsaws used for freeing overpainted sash windows are commonly called Sash saws but frankly, this is not correct. 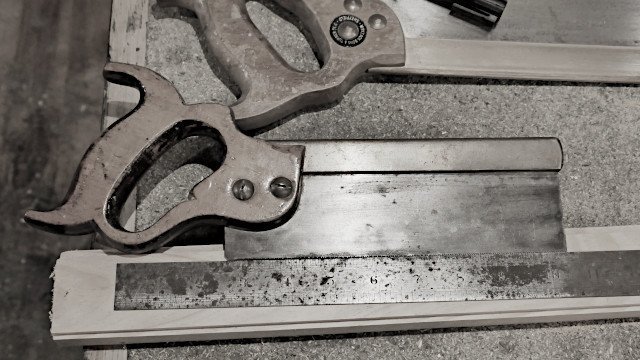 A small saw used for cutting small dovetails is the Gents saw. The Gents saw is a tool of the past and not many woodworkers still use it for cutting dovetails. I own a Paramo gents saw which I find useful but frankly, I have little need for it.

Saws with a narrow pointed blade are known as a ‘Keyhole Saw’ sometimes referred to as a ‘Padsaw’. Technically this is incorrect as a ‘Padsaw’ is only the pad style handle normally found on the ‘Keyhole  Saw’

The Keyhole saw is used for cutting internal radiuses or circles.

All the saws above have other distinguishing factors. One very important fact is the tooth pattern. The sawtooth of the hand saw is designed to either cut wood along the grain or across it. We call saws with each tooth grind: Rip or Crosscut.

Saws with a rip tooth profile are designed to cut wood parallel with the grain. The most common saw to have a rip saw-tooth pattern is the panel saw. Re sharpening the rip saw tooth profile is easy compared to the crosscut profile.

As far as we know the Japanese saw was the original pull saw. Today Japanese style saws are made in many different patterns but essentially they are all ‘Pull Saws’.

You can read our blog on the JAPANESE SAW

Handsaws from Japan come in many patterns but the Dozuki is the one that is backed. The biggest difference is that the Dozuki is a pull saw. Any pull saw cuts the wood as you pull the saw towards you instead of pushing the saw as you would with any western saw.

Japanese is used on the Pull Stroke

Saws that have the teeth facing in the opposite direction are known as ‘Pull saws’. To use a Pullsaw you pull the saw towards yourself instead of pushing the saw as you would with a traditional backsaw or panel saw.

Pull saws do not require a back because when we pull the saw through the wood the blade is kept straight under tension. The pull action of the pull saw is also good because the blade is usually thin compared to the back saw or a panel saw.

Saws with a crosscut profile are designed to cut wood across the grain sometimes known as perpendicular.

Crosscut saws are available in many different patterns but the most obvious difference that you should concern yourself with the pitch.

This blog is mainly concerned with the different types of woodworking hand saws available but I feel it is important to get into saw pitch.

What is saw pitch?

Saw pitch is the general term given to saws with more or fewer teeth.

Saw pitch is measured in PPI in the USA

PPI stands for ‘Points Per Inch’. What is PPI? Well, the tips of each tooth are known as the points. So we measure the pitch of a saw by counting the points of teeth in one inch of the saw.

TPI count the teeth not the points but the teeth. We count how many teeth in one inch starting from gullet too gullet.

Although the saw pitch is a general term the two methods of measuring it are not so general. The difference is the outcome. Measuring pitch using PPI always result is one extra tooth count compared with TPI.

Some links in this blog are affiliates and we receive a small commission.