Limoges is in the department of Haute Vienne under the umbrella of the new department Nouvelle Aquitaine.

Welcome to our blog but please let us introduce ourselves.

We are a small Window Shutter manufacturing business that has an affinity to the beautiful country France. Our workshops are powered by 60% of ecologically produced electricity and extra electric requirement is supplemented by EDF. The wood we use is certified by PEFC. Working ethically is important to us.

Welcome to our blog but first please let us introduce ourselves.

We are a small Window Shutter manufacturing business that has an affinity to the beautiful country France. Our workshops are powered by 60% of ecologically produced electricity and the extra electric requirement is supplemented by EDF. The wood we use is certified by PEFC. Working ethically is important to us.

Pretty as a Picture is The City of Limoges in France

The city is a reaped with small quaint shops selling an unusual array of products alongside the usual shoe and bag stores. Not only do you have the typical stores with stereotype window dressings. But if you’re walking through the older parts of the city such as  ‘Quartier de la Boucherie’ you will see the nicer less commercial shopping areas including cobblers. More akin to ‘Butcher Baker Candlestick maker’!

Limoges is in “Cities and Countries of Art and History”

As a point of precedence, it is great that Limoges was included in the list of 181 “Cities and Countries of Art and History” This is a fantastic achievement to get this prestigious badge from the ‘Ministry of Culture’ in 2008.

A well-deserved accolade as the city has a rich history and a strong art movement. Two centuries have enriched the city to have a great cultural heritage in Limoges. Many local artefacts, knowledge and Art Deco architecture.

A guide to Limoges

I was in Limoges just Yesterday in 2019

Yes, it is true that on this day it was cold but it was dry and still we got a positive feeling as I strolled through the city with my wife. Parked at the shopping mall ‘Saint Martial’ we first had a shopping spree in the sales followed by a coffee. Some good bargains to be had in the January sales in Limoges.

Once our Mall experience was finalised we decided to walk into the centre of the City. Currently, the old iron structure that has various stores housed within is undergoing renovation. There is a temporary building next door to house those stores.

After snapping a few pictures we then looked for our regular jaunt ‘FNAC’ which has a selection of vinyl records, other media and technology. Several levels housing the stock for you to meander around.

Democracy is important to us.

If you have anything to add to this blog please write a comment. Your input helps us provide our readers with accurate and current information.

A super place to do your Christmas shopping and if you missed that the January sales are good. We often visit the Family Village and find it useful for many useful purchases. If you to buy the DJI Mavic Pro then a visit to Boulanger is well worth considering or arts and crafts are your things then Cultura is a great place for all things Art.

DIY building materials can be found in the large store Leroy Merlin and toys can still be found in TOYSRUS. ToysRus is a suffering chain in the UK but in France, they still exist.

Here is a drive-by of the Family Village:

In Limoges, the tram network is very useful and used by many commuters in the city. The iconic overhead connector connects to cables and powers the buses/trams electric motors. This is great if your a cyclist in London you will appreciate how dirty the diesel buses are. Many a time in the UK I have gulped a load of black pollutants.

The tram network in Limoges does not use tramway track but purely powers the trams which run on standard wheels.

What is Limoges Famous For?

If you are into architecture then the train station: ‘Benedictine’. This train station is one of the most famous and most beautiful buildings in Limoges. The French Revolution played a part in the naming of this station. It was named after the Benedictine Monastery.

The building was designed by a French Architect Roger Gonthier during 1917. I travel to this station on a regular basis and it is nice to see the communal Piano in the main hall.

The Station is built over two years from 1927 and 1929 on the Orléans–Montauban railway line. It has been said that this train station is one of the last of the monumental types and cannot be argued that the Benedictine station is the most beautiful in Europe. 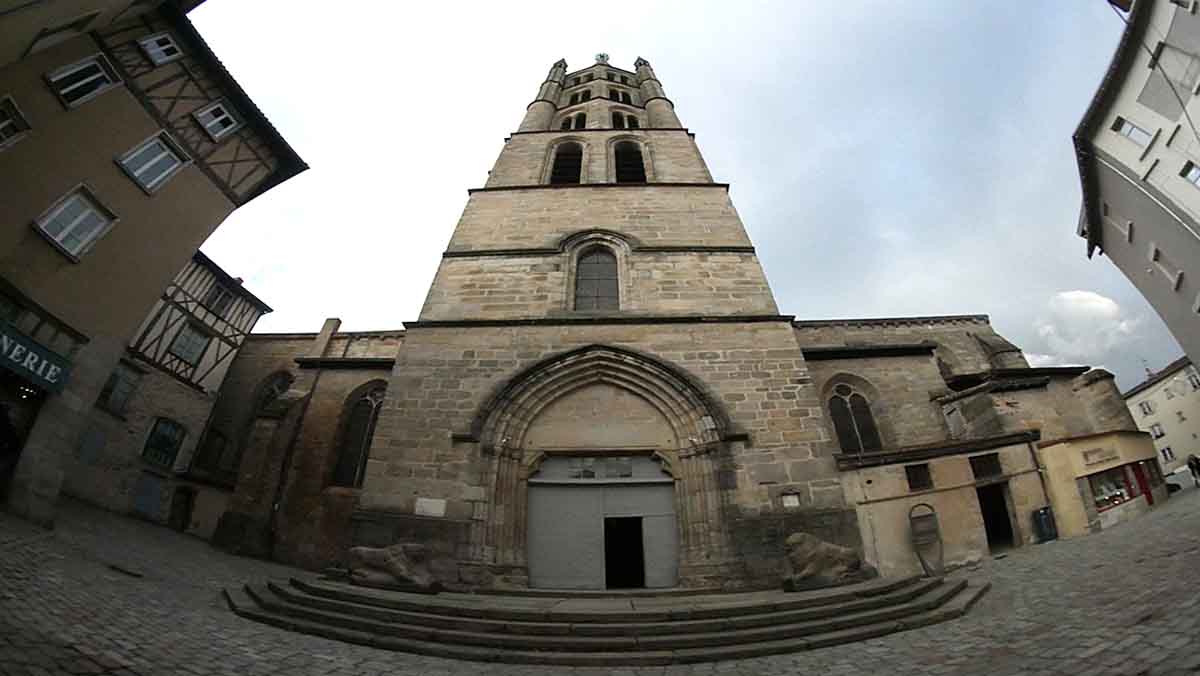 Cathedrals are notorious for taking centuries to build and Saint-Etienne is not alone. For instance, the construction started in 1273 and took six centuries until the end of the 19th century.

It is obvious if you known architectural styles then you will know the Gothic influence this cathedral contains. If you have the urge to mount a new bookshelf on the walls of the cathedral then you may have trouble! The Cathedral is built from granite so expect to burn out a few tct drill bits in the process.

Other Places of Historic Interest in Limoges

The firing of the Famous Limoges Porcelain

Porcelain as a clay product in its modelling form contains water and even after air drying, there is still some water.

The Town ‘Saint Yrieix La Perche’ is the place where Kaolin was discovered in 1768. This rock is what makes the fine white clay special. A bit like the special sand that Zeiss uses for their fine glass lenses.

The firing process removes any excess water and hardens the clay. But also hand-painted glazing liquids and final glazes will need firing too. Depending on the modelling artist’s design the desired end result of the fired glaze will influence the techniques required.

Over half the porcelain that is made in France is still made in Limoges. This is a big achievement for any City or region.

The firing process is also used in the firing of enamels and the commonly used in Limoges in the production of enamelled metal signs. These signs have been made since the middle ages.

If demographics are your thing then a visit to Wikipedia is in order.

The Article has some store links that we think you might find interesting which we get a small commission for.

I hope you have enjoyed our overview of the City of Limoges where we live and work near. Our business is busy supplying Shutters or Volets and Doors to the French public under our tradename Wallybois