The Mediaeval town of La souterraine

La Souterraine has its own mediaeval Centre surrounded by fortified enclosures. The fortified enclosures with built-in the 12th century. After being attacked several times the ramparts were widened Between the 14th to the 16th century these fortifications were there to protect the town after the Souterrain and its Gentry. 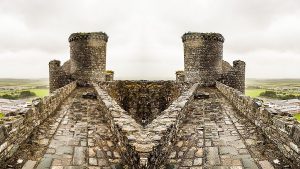 A rampart is a fortification in the form of a bank or wall. These Ramparts we used to defend the perimeter of a settlement or Castle.

I did consider building a moat around the Wallybois workshops. After some thought, we realised that it was foolish considering my Volet Battant workshops are built on a hill but after giving it some thought these Ramparts could work quite well!

Not all of the ramparts have survived the ‘test of time’ but there are two towers that can still be seen.  Originally there was 8. 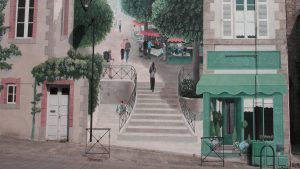 Walking around the town you cannot miss the large mural which draws you into its perspective. Scenes of French life painted in such a way to trick the mind.

Church of Our Lady

In 1017 the first signs of construction of the crypt commenced. This commencement of new Church structure Project follows the building of the Priory.

It is believed that the name Souterraine comes from the Crypt.

This church was internal beautiful that was built with substantial Granite buttresses.  Almost the kind of thing that you would find on a fortified historic building

Like Rochechouart Castle The crypt of the church of Our Lady holds art exhibitions.

Welcome to our blog but please let us introduce ourselves.

We are a small Window Shutter manufacturing business that has an affinity to the beautiful country France. Our workshops are powered by 60% of ecologically produced electricity and the extra electric requirement is supplemented by EDF. The wood we use is certified by PEFC. Working ethically is important to us.