With the techniques explained in this tutorial, you’ll find planing the end grain of a piece of wood easy. You will need:

I use two types of hand plane for planing end grain.

Stanley Bailey No7 for use with a shooting board and the low angle block plane for freehand work. 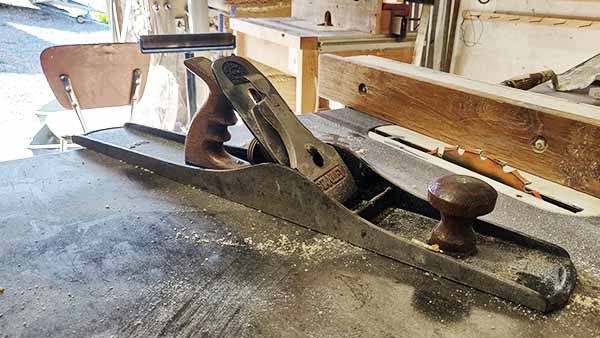 These two types of hand planes are different. One fundamental difference is the orientation of the plane iron.

Bevel up or bevel down plane iron?

What plane to choose for planing end grain

The low angle block plane has the bevel up which is contradictory to the number 4 smoothing plane which has as the bevel down. The old wooden coffin plane is an early variation of the traditional smoothing plane. Hand planes used to always be made out of wood but even today you can still buy or make wooden hand planes. Wooden hand planes are usually made out of some fruitwood or Beech sometimes with a metal fore sole.

So the cutting angle of the low angle block plane isn’t that different from the smoothing plane. I believe the main difference between these two planes is the adjustable mouth in the sole of the low angle plane. Another difference is that the bevel up the shaving can leave the blade without any obstruction from the chip breaker.

Use a sacrificial piece of wood

Please note that your hand plane must be extremely Sharp. A blunt plane will just jump across the timber and not make clean end grain shavings.

Homemade shooting board for end grain 90° and 45°. 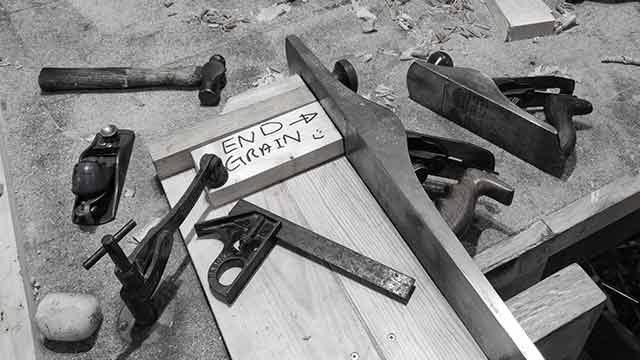 The shooting board is also very nice to use and it helps by guiding the plane across the end of the piece of wood. These aren’t the sort of things that you buy off the shelf but something that you can make yourself. My shooting board doesn’t only work with end grain at 90-degree but also I have it set so it can do 45 degrees as well.

This can be a simple solution but does create a little waste. Simply just make some passes across the end grain first. You will get some breakout but this will be removed when you trim your workpiece to width.

Shoot end grain in the opposite direction

Like the title says, shoot the end grain in both directions so not to exit the board and break fibres. This is fine for work that does not need accuracy as it can be difficult to true the end grain with this method.

Use Cascamite to bond endgrain. This suggestion may sound odd to some hard-line traditional woodworkers. I have experimented with the concept of prepping the end-grain before planing with ‘Cascamite Powdered Resin Woodglue’.

How does it work?

The Urea Formadahide Cascamite bonds the pores and fibres of the timber to be planed. This prevents the fibres from breaking away from the timber. The Cascamite also hardens the wood. The concept works similar to applying masking tape to a cute line to prevent break out.

No matter how great your tools are you will need to Hone your sharpening technique (excuse the pun). Sorry, but if you don’t manage to get a fine edge then you will fail at the first hurdle. Don’t despair as with some practice and following a few rules you too will get satisfaction from your efforts.