The Japanese hammer is called a Genno and is used to impact chisels, setting a plane iron and as you would expect driving nails.

Japanese Genno vs the Western Hammer

The hammer has a fundamental task to drive nails and to bash stuff but there is more to it than that. The Genno hammerhead is either square with rounded edges, hexagon in either plated in copper or plain.

A pin hammer is also available but not to the same head design you would see on a western hammer. As a European, I have been brought up with the traditional claw hammer, ball pein, cross pein and the pin hammer.

The striking head of the Genno hammer has two faces, one curved and the opposite flat. The Flat face is used for striking the chisel or driving nails. The curved face is traditionally used to drive home small nails, the convex curve applies the force to the nail without damaging the surrounding area.

What is the Genno Handle made from?

The Japanese Genno hammer handle is made from white Oak (Quercus Myrsinifolia), unlike western hammers which are made from Hickory. 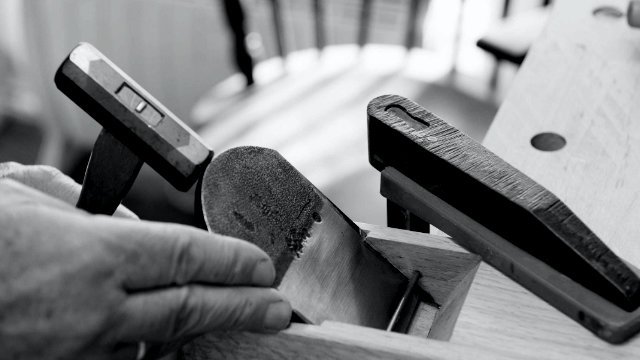 Adjusting a Wooden Plane with the Genno

The wooden hand plane has no mechanical blade adjustment as you would find on a Stanley Bailey but only a wedge to secure it. The Genno is used to tap the back of the plane body. Tapping the top of the blade increases the depth of cut but tapping the rear of the wooden sole will retract the blade.

How is the Head Attached?

The Genno head is fixed to the white Oak handle and secured with a metal wedge. The method used is similar to traditional western hammers.

How much does the Genno Weigh?

The weight of the Genno depends on the size of the handle and head. Get yourself a Genno (Hammer)

The Amazon links pay us a small commission

Check out our other Articles on Japanese Handtools