The Chestnut tree was introduced to the further reaches of Europe by the Romans to feed its military and horses. Today we use the timber in woodworking and construction. 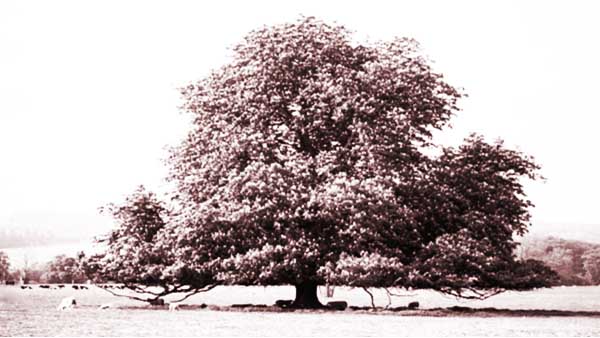 The shape of the Sweet Chestnut Tree?

The chestnut tree has a similar shape to the Oak but with a lower crown. The shape will be more bush-like if the tree has been previously coppiced.

Coppiced Chestnut woodland can look sparse but will thicken in time but not visually appealing with a traditional crown shape. We call these woodlands as a Timber Farm!

What is the Bark like of the Chestnut tree?

The bark of a mature sweet chestnut is deep and furrowed. But the younger chestnut tree has a smoother bark. The bark is radially crossed as it ascends the trunk. The bark resembles a large twisted steel cable.

The chestnuts grow within a prickly shell (a bit like Mother Inlaw) At the time of maturity they drop to the ground or you could pick from the tree.  The Chestnuts are prone to larvae so care is needed to check for holes in the hard brown skin of the chestnut. Discard any with these holes unless you like extra protein! 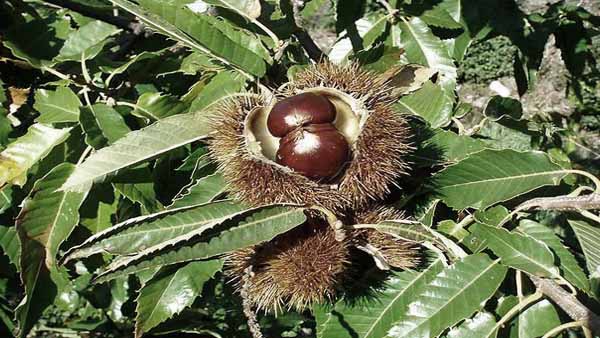 So you can eat Chestnuts?

Yes, but if you are on a Keto Diet I would not recommend it. Chestnuts contain 28 grams of carbohydrates per 100 grams.

If you are a fan of carbs but want to reduce protein and fat then they the thing for you. Unlike most nuts, the Chestnut has very little protein.

How does the Sweet Chestnut Reproduce?

Like the Oak tree, the Chestnut is wind fertilised. Both the male and female flowers are present on the tree. It may sound saucy but the Angiosperm sexually reproduces within the flowers. The fertilised flowers then develop into the Chestnut.

How Big is the Sweet Chestnut Tree?

The Castanea Sativa will grow to about 30m but is often harvested before it can reach that height.

How Long Will a Castanea Sativa Tree Live?

The Chestnut trees can live up to 300 years. Large chestnuts are becoming a rarity in Europe as this deciduous Chestnut tree have been extensively farmed. The farming method has changed the landscape of chestnut woodlands because of coppicing. 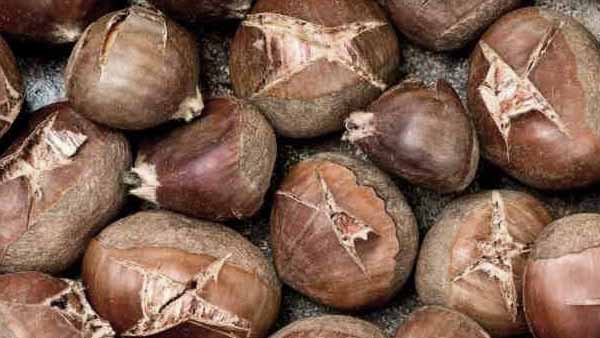 The sweet chestnut tree is affected by Blight. Not too dissimilar to Tomato blight causing death and dieback.

The ascomycete Fungus Cryphonectricia is the culprit. This fungus was first recorded in North America in the early part of the 20tth century but it found its way to Europe in 1938.

If allowed to take hold the ‘Sweet Chestnut Blight’ can devastate entire forests of this tree.

Transmission of the Chestnut Fungus?

Wounded European Sweet Chestnut is most susceptible to

infection by the fungus.

Chestnut Blight is harmless to Oak trees and Horse Chestnut (Conker) seems unaffected. It is common for Chestnut to be coppiced for wood harvesting.

This method of harvesting makes the tree highly at risk of infection. The cut area is close to the ground is likely to be moist so the fungus will multiply much faster.

The fungus attacks the bark of the chestnut tree causing scab like callusing on, the bark.

Crown dieback is a common symptom but can be mistaken as another condition.

The timber from a chestnut tree has been used for centuries and is well known as a universal wood. In France, we use it for construction like Oak but it is better known for flooring.

Scale and Practical Use

The reason for this is that farmed Chestnut does not reach the size or scale of Oak due to coppicing. It is rare to see large fully grown chestnut harvested for timber unless a virgin forest is felled.

As strange as it sounds but the Chestnut tree has another use other than food or timber.  The Bark of the Chest tree contains about 7% Tannin, and the wood contains around 13 % Tannin. 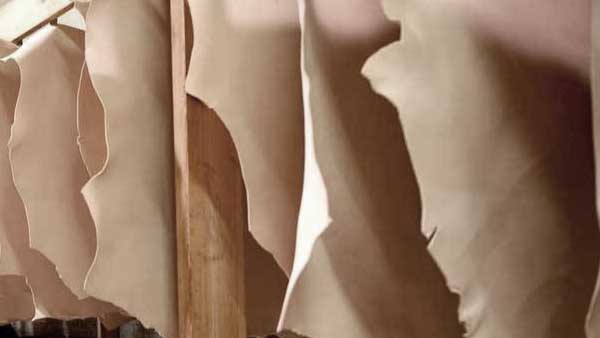 What is Tannin used for?

My ancestor Robert Kett was a Tanner and major landowner. The processing of tanning was is an age-old process of treating animal hides. Untreated leather is susceptible to rot and less durable.

Tanin was the key ingredient for treating leather but it was not the only way. Urine would be collected because of the ammonia. Ammonia has the ability to break down organic material making the leather easier to work.

Is Chestnut Similar to Oak?

Chestnut or (châtaigne in French) has a similar grain and figure to Oak but it is a lighter colour. Chestnut is lighter in weight than Oak and is easier to the machine. Planing Chestnut wood machines easily with sharp planer knives but it is prone to some tear out.

Chestnut is an Important Tree in France?

The French people do use other forms of heating but the wood burner is without a doubt the most used form of heating in the winter. Local woodlands are felled and generally farmed solely for logs. If a large specimen is found whilst harvesting chestnut it will be used for lumber.

We think of trees as a harvest for timber production but the food was its main reason for its introduction from Greece. 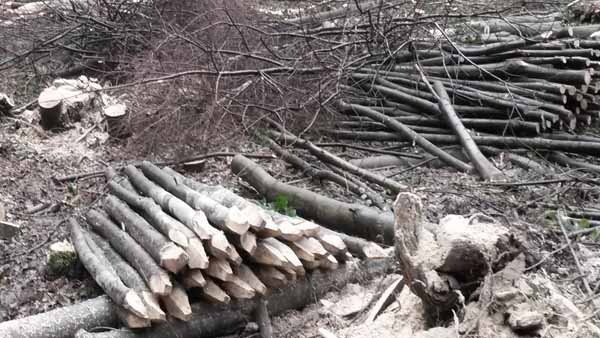 Unlike the oak tree, the chestnut is more versatile. The Chestnut tree can be coppiced which is sustainable. The timber is strong and lasts a long time.

The Chestnut tree grows faster than the Oak and lends itself to coppicing. When you chop down a chestnut tree it will regrow.

When harvesting any timber we must ensure our future harvests are protected and that we can harvest again in 10 or more years.

Chestnut is a very popular and practical timber and is an environmental fuel source because the tree will regrow if coppiced, unlike Oak. Coppicing is the felling the tree at ground level so it can regrow and produce long straight growth.

Chestnut is a sustainable timber.